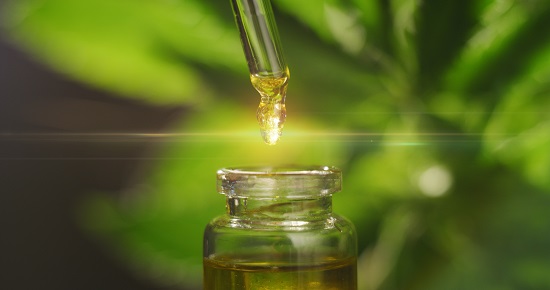 The growing legal and popular acceptance of marijuana in the U.S. can be difficult for addicts trying to stay clean. In a lot of places, you can walk into a cloud of pot smoke almost anywhere, which might be an unwelcome trigger.

A side benefit, though, is that the legalization push has brought wider availability of cannabidiol (CBD). CBD oil was long banned under the umbrella of anti-marijuana laws because it comes from cannabis, even though it won’t get you high.

In fact, when the World Health Organization examined the evidence a few years ago, it found no evidence of recreational use of CBD, and no real potential for abuse. At the same time, research suggests that it could have many medical benefits, including, paradoxically, for addiction itself.

The part of cannabis that gets people high, as most users know, is the tetrahydrocannabinol, or THC. But THC isn’t the only cannabis ingredient that acts on the human body.

There are, in fact, over 100 such ingredients, called cannabinoids. Little information is available about many of them, but since CBD first became identified more than 70 years ago, it’s been subject to a fair bit of research.

CBD and THC do have similar effects in some ways. Both of them seem to help nausea, inflammation, and pain. Both of them are also relaxing for most people. But interestingly enough, CBD doesn’t seem to have the contradictory nature of THC, which makes some people more anxious, especially at high doses.

Neurochemically, CBD actually seems to block THC from binding to receptors in nerve cells partly, so it appears to inhibit some of THC’s particular effects. Scientists are still learning about how this works, but this may help some people with addiction, in the following ways:

Some studies indicate that CBD can help emotional memory processing. This response is important to drug addiction because memories of euphoric drug experiences drive yearnings for more; it is especially true when something triggers a memory, like the smell of marijuana smoke.

CBD does not seem to make people forget these memories, but it does appear to lessen their emotional power. One study found that smokers of high-THC, low-CBD pot became more sensitive to these triggers – and also to food triggers – while low-CBD, high-THC marijuana had the opposite effect.

Withdrawal symptoms depend on the drug, but if your body is dependent on anything, it can be brutal to go off it. Common symptoms include:

CBD may help with many of these, and unlike morphine, it’s unlikely to cause an addiction of its own. As mentioned earlier, studies have implied that CBD can ease anxiety, and some users say that it gives them an overall sense of well-being.

Curiously, there’s also some evidence that CBD can help psychotic symptoms. This factor is another point where it seems to counteract THC, which can make psychotic symptoms worse – whether or not it actually causes psychosis is still a matter of controversy.

CBD also can help people sleep. This advantage might just be from its calming effect, but the cannabinoids also seem to regulate people’s sleep and wake cycles, so that may also contribute. Unlike many sleeping pills, CBD doesn’t depress the central nervous system, so it’s a safer option.

Many addictions arise from self-medicating some untreated mental disorders, such as depression, anxiety, or post-traumatic stress disorder. The habit can be very difficult to shake if the underlying issue doesn’t get the attention it needs.

CBD may be part of an overall therapeutic program, not only for the mood disorders mentioned above but again because of memory processing. An unprocessed trauma is just as much an emotional memory as an ecstatic drug experience, and some research suggests that CBD can help loosen the grip of those as well.

So that’s the theory. How does CBD affect actual addicts?

So far, the only real human study of this is in tobacco smokers. Smokers who were trying to quit, smoked fewer cigarettes on CBD, compared to a control group that was also trying to stop.

Several studies in rodents also showed promise. To make a long story short, while CBD didn’t really affect the development of addictions, it did seem to help prevent relapse.

For instance, mice who were trained to self-administer heroin (it’s amazing what these lab researchers get up to) were less responsive to the conditioned cue for seeking heroin when they were on CBD.

That supports the previous evidence that CBD can make the brain less susceptible to memories of drug use.

Is CBD Right for You?

Drug addiction is a complex condition, so there’s unlikely ever to be one miracle cure for it. But the evidence suggests that CBD can be a component of it.

This reason is because of CBD’s lack of side effects. Many users of current treatments for anxiety and psychotic symptoms find them difficult to tolerate. CBD might provide an alternative for many people.

Finding a good supplier is important because the novelty of the industry means there aren’t many regulations in place to ensure quality. Look for a supplier that posts third-party lab tests of their CBD extract, to make sure that there’s no trace of THC in there. And in case you’re wondering, if your CBD is truly THC-free then you shouldn’t fail a drug test.

CBD is available in many forms, but the most potent are oils, vapes, and transdermal patches.

Oils are the most flexible. You can measure out the precise amount and absorb it under your tongue, and it should last six or eight hours. You can also mix it with food or drink, but it’s somewhat less powerful that way.

Vapes can be helpful if you’re trying to quit smoking, but you still like the ritual. They provide a stronger and faster effect; however, it wears off in a few hours.

Transdermal patches may not provide the oral gratification, but they’re generally the most effective way to get the CBD into your bloodstream. Like a nicotine patch, it can sit discreetly under your clothes as you go about your day.

Living in recovery is never easy, but as CBD becomes more widely available, it can hopefully make it a little easier.