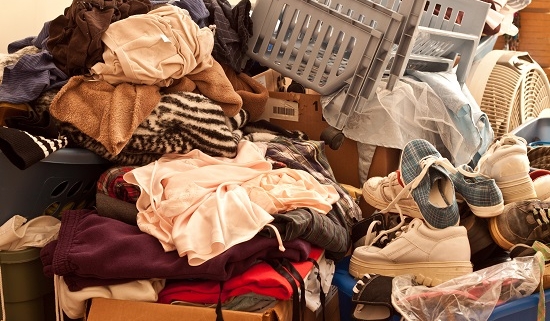 Human beings are creatures of habit, but when habits become compulsions, disorders like obsessive compulsive hoarding can take hold. This obsession with things and collecting things takes many forms, so, when this habit interferes with daily function, the habit becomes part of the horde. The horde operates with no consideration for anything but the compulsion to collect, store, and pile up the objects of worship. The real reason this affects people is unknown, but researchers think that areas of the brain may not respond properly to serotonin, a chemical that helps the nervous system communicate with itself. This chemical dependency was created sometime in the person’s lifetime, which connected them to the ultimate compulsion to hoard. Obsessive compulsive disorder (OCD) is directly related to the hoarding disorder that exists in the population. The latest statistics estimate that 1 to 3 percent of the U.S. population suffers from OCD, so that means almost 10 million people in the U.S. are suffering from this disorder. 2 to 5 percent of the U.S. population exhibits some level of hoarding behavior. There are millions of people operating in the horde just in the U.S. alone.

Hoarding in the Public Sphere

Popular televisions programs such as “Hoarders” and “Hoarding: Buried Alive” have mainstreamed the phenomena and created awareness, but at the same time have monetized the behavior. Using mental health problems as entertainment and for their shock value should be resisted. However, creating this awareness has a benefit of encouraging people and families to seek help about their circumstances. It is important for people living with this disorder to realize that television shows may not present the entire effort necessary to treat this disorder. The show producers are able to edit together a tight little package of content with a bow, but the real issues of hoarding might be a life long struggle. That is why it is important for people to know the true struggle of this disorder, so they can better prepare themselves to deal with this condition.

People that hoard have an unhealthy relationship with their stash, so much that the material objects supersede their own level of comfort. That is why they end up displacing kitchen tables, bathrooms, and beds, places where they are supposed to be able to function, with piles of useless junk. The individual suffering from the disorder can’t throw out broken appliances, unused gifts, or even things that have no financial or emotional value such as magazines, newspapers, junk mail, garbage or even dead pets. These objects signify a reluctance to let go of some unknown emotional or psychological issue. Even those with mild forms of this condition have rationales for collecting junk, which they might deem as resources. Some are even extreme environmentalists that believe that they are responsible for their trash and feel guilty for not recycling, which starts a collection.

There is definitely an emotional issue regarding their stuff as individuals with this disorder become perturbed whenever someone else touches one of their objects or tells them they need to discard something. This might signify past trauma or adversity that has deeply seeded the emotional connection with materials and idea of loss. An individual might have grown up impoverished so the materials serve as an artificial buffer to scarcity. PTSD, depression, or autism spectrum disorders also serve as launching pads for this compulsive hoarding behavior. These conditions factor in to a person’s inability to remove or get rid of possessions because of the emotional or psychological scars they are trying to cope with. Human being’s psychological and emotional systems are very sensitive to stimuli during their development and throughout their lives. Even experiences later on in life can trigger behaviors as a form of coping mechanism. The inability to cope with loss is at the center of many of these disorders.

Nervous ticks, sudden eye movements, and facial spasms can be used to spot someone with this disorder. These ticks are the nervous system pointing to an underlying condition that is short circuiting the individual’s endocrine system. This could be a result of a medical issue or genetic disorder that is passed down generation to generation. A lot of behaviors are tied to genetic markers that point to neuroticisms that are already built into a person’s genetic makeup. In these cases, it is important to understand that genes can be turned on and off by environmental factors. These factors can include experiences, diet, pollution, and other external variables. Not all genes are expressed just because they exist in the human genome.

Obsessive compulsive hoarding disorder is a verified medical condition that exists in both sexes of the human population. The condition can be treated with medication, psychotherapy or both in tandem. Many patients with this disorder will respond to these treatments, but others will still experience symptoms. That is why it is important to figure out the right combination on an individual basis. Not all therapies or approaches will work for everyone.

There are a few different medications that have shown benefits for obsessive compulsions. The two groups are serotonin reuptake inhibitors (SRI) and selective serotonin reuptake inhibitors (SSRI), which have been shown to reduce uncontrollable behaviors that result in compulsive hoarding. These medications include clomipramine, fluoxetine, fluvoxamine, and sertraline. SRIs are prescribed in higher doses and may take 8 to 12 weeks before showing improvement. Depending on the individual, the treatments may work faster or slower.

Psychotherapy such as cognitive behavior therapy (CBT) and habit reversal training can be effective to aid these medications for many patients. CBT is a form of psychotherapy that treats problems and boosts happiness by modifying dysfunctional emotions, behaviors, and thoughts. It encourages patients to challenge distorted cognition’s and change destructive patterns of behavior. This aims at the heart of compulsive hoarding, which is a set of behaviors and thought patterns that are producing unhealthy outcomes. Habit reversal training involves teaching the patient to be more aware of the behaviors, so they can stop it before it happens. The first step is recognition of the tendency to collect something that has no real benefit. If you can stop the initial urge, you can find yourself with less things stuffing up your life.

If you or a loved one might be suffering from a hoarding disorder, reach out to a doctor or mental health professional for help. No one should live with the debilitating effects of compulsive hoarding. There are resources available to help combat this disorder.

Please contact a Treatment Specialist today at (866) 644-7911 for help regarding this issue.