Risks to Heroin Detox at Home without Supervision

With the DIY (do it yourself) trend firmly entrenched now in our culture, somehow I doubt Pinterest has a DIY heroin detox pin. Heroin addiction is so powerful and has such a tight grip on the nervous system that to attempt to detox at home is a fool’s errand. There are too many ways that a heroin detox can go awry, putting the addict at great risk of dangerous heroin detox symptoms or deadly relapse.

A heroin addict has already done much damage to their body. In fact, up to 80% of all hepatitis C infections each year are associated with intravenous drug use, of which heroin is a major player. In addiction to liver disease, heroin users have heightened kidney disease, higher risk of contracting HIV/AIDS, and pulmonary complications. Usually a heroin user is in a general state of depleted health, having ignored dietary and nutritional needs, dental care, and exercise. Someone in overall poor health should not attempt a heroin detox (as opposed to its common misnomer, heroine detox) at home.

The Dangers of Heroin Detox at Home

While it may be tempting to think that heroin addicts have the ability to will themselves to simply stop using the drug, that is clearly not the case. Addiction trumps willpower….and by a long shot. Once drug dependency has hijacked one’s will it is ludicrous to believe that one can simply discontinue using. Some decide to attempt heroin detox at home for financial reasons; perhaps they have no health insurance coverage for it. Some may erroneously believe that detoxing at home will simplify the process while also remaining in the safety of their home. Some may seek anonymity, not wanting to be spotted entering or residing in a drug rehab facility. While these considerations may be valid, they are not plausible if a successful detox and withdrawal from heroin is desired.

Aside from the common withdrawal symptoms—irritability, insomnia, diarrhea, body aches, nausea, sweating, vomiting, chills, anxiety—several potentially dangerous issues can present themselves during heroin detox at home. The intense physical and psychological discomfort can be too much to bear, causing many who wish to stop heroin unable to complete the detox phase. Without medical supervision the situation can rapidly become very serious. These risks include:

For the best chances of completing the detox and withdrawal phase, a medically supervised setting is recommended. Medically assisted detox provides 24-hour support during the detox process where interventions can be made to alleviate many of the uncomfortable heroin detox symptoms, such as body aches, insomnia, or diarrhea. Without receiving support and assistance during detox, many will simply give up and return to using heroin.

One of the most serious concerns during heroin detox is craving that can lead to relapse. Medications are available that help reduce cravings during heroin detox, such as naloxone or buprenorphine. In addition, some heroin detox programs offer nutrition-based therapy or intravenous amino acid therapy. Another benefit to a supervised detox is the access to treatment specialists as well as other addicts who are also going through the detox process. Having this emotional support helps ensure completion of the process and encourages the next step of recovery, an inpatient treatment program. Overall, detoxing in a safe, controlled environment offers far more benefits than attempting heroin detox at home.

Is Heroin Detox at Home Right For You? 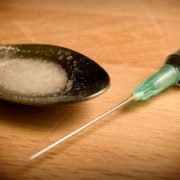