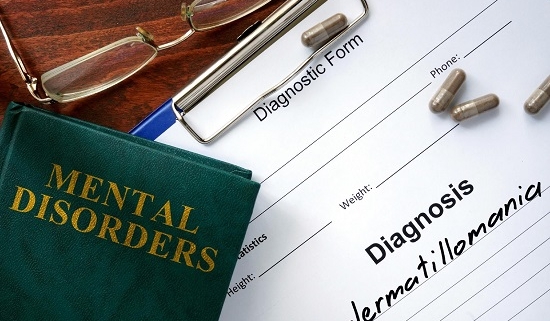 Dematillomania, also referred to as skin picking disorder or excoriation disorder, refers to the compulsive picking, rubbing, scratching or digging into one’s skin. This is not the same as the occasional picking at a pimple or scab, which is a common behavior. Compulsive skin picking involves damaging the skin by repetitive picking, resulting in noticeable sores.

The behavior is directed toward disturbing the skin, whether it is healthy skin or acne, scabs, or some form of skin lesion. The compulsive nature of the disorder may result in the individual spending large chunks of time on the picking behavior, even several hours a day. Compulsive skin picking results in open sores that can bleed or scar the skin. The area of the skin targeted may shift from one region to another, and can persist for weeks, months, even a year if untreated. Attempts are often made to camouflage the skin damage using make-up or clothing.

While the link to OCD is common, there are other causes for skin picking behaviors. These might include withdrawal from opiates, a dermatological disorder, a skin infection such as scabies, body dysmorphic disorder, psychosis, or an autoimmune disorder. Before pursuing a treatment plan, a careful evaluation should be conducted.

Signs of OCD skin picking disorder are evident visually, as the individual will appear with multiple, sometimes dozens, of visible sores covering an area of skin. They may wear long sleeves and long pants during hot weather. They may have attempted to cover the sores using make-up. They may exhibit signs of depression. They may avoid activities they once enjoyed such as going to the beach, water skiing, pool time. They may become isolated, due to embarrassment about the appearance of the skin.

The DSM-5 has classified Excoriation (skin picking disorder, dermatillomania) as an obsessive-compulsive and related disorder. It lists the following diagnostic criteria:

About Obsessive Compulsive Disorder AKA OCD

The disorder shares common features to OCD. Just as someone with OCD feels anxiety caused by an obsessive thought, leading to the compulsive behavior, skin picking disorder has a similar path. The individual may experience an urge or physical tension that precedes the picking, followed by unpleasant emotions that lead to rationalizing the behavior, giving themselves permission to pick the skin. Following the skin picking session, the individual experiences urge reduction and a sense of pleasure or relief, as well as the negative effects of shame, depression, isolation, sores and even disfigurement.

This is a similar experience to classic OCD, where the discomfort linked to the obsessive or disturbing thoughts leads to repetitive behaviors that result in feelings of shame, embarrassment, isolation, and depression. OCD is a mental health disorder within the anxiety spectrum. Because of the close relationship to OCD, treatment interventions for skin picking disorder are similar.

How to Stop Compulsive Skin Picking

The treatment plan for individuals with skin picking disorder will depend on whether it is intrinsically a mental health disorder or simply an unconscious bad habit. Once a thorough evaluation has been conducted, it can be determined if the person meets the criteria for a mental health disorder. If not, a therapy known as habit reversal training can help identify triggers that lead to the skin picking episodes, and then respond with more healthy behaviors.

When, however, the behavior is a diagnosed mental health disorder, the usual treatment protocol will be similar to that of an OCD diagnosis. The individual will be prescribed both antidepressant drug therapy along with psychotherapy, specifically cognitive behavioral therapy (CBT).

CBT has been found to be the most effective type of psychotherapy for treating OCD. It is a short-term therapy that helps patients recognize thought distortions that precede the compulsive behaviors. Working with the therapist, the individual will learn to notice triggering disordered thoughts and then reframe the thought patterns so the compulsive behaviors will not be necessary for relief.

In addition to the antidepressants and CBT, many also find value in learning stress-reduction techniques that they can access when they perceive an upcoming trigger. Deep breathing exercises can be done anywhere and will almost immediately reduce feelings of anxiety. Another option is mindfulness meditation; keeping the mind focused on the present moment and concentrating on the breathing process can also promote a sense of relaxation.