Bipolar Disorder is a mental health condition that is characterized by fluctuating moods from manic highs to depressive lows. These mood swings can really disturb an individual’s relationships, work, school, and personal activities. Bipolar Disorder affects 2.6%, or 5.7 million adults, in the United States every year. If you or someone you know is suffering and needs help, there are a number of treatment options available. The condition cannot be cured but with the right treatment protocol and continuing care and management of the condition, most people lead healthy and happy lives.

of U.S. adults are estimated to experience bipolar disorder at some time in their lives

of cases are classified as severe

The defining characteristic of Bipolar Disorder is the occurrence of mood swings, from manic to depressive episodes.

Symptoms of a Manic Episode:

Symptoms of a Depressive Episode:

It is also possible to experience the symptoms of mania and depression simultaneously. The severity of symptoms can also vary, although 83% of diagnosed individuals with Bipolar Disorder have severe cases. Only a small portion of people who suffer from this disorder will have mild to moderate symptoms.

There are four main types of Bipolar Disorder that share similar symptoms but have varying degrees. 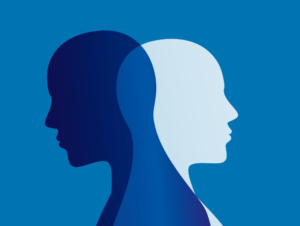 Bipolar Disorder and Other Illnesses

Anxiety and ADHD: People with Bipolar Disorder often have a co-occurring illness such as an Anxiety Disorder or attention-deficit hyperactivity disorder.

Post Traumatic Stress Disorder: Some people may concurrently experience PTSD with Bipolar Disorder. For some, PTSD can also contribute to the onset of Bipolar Disorder since it is associated with a significant amount of stress.

Eating Disorders: On occasion people with Bipolar Disorder may also have an eating disorder, such as binge eating or bulimia.

There are some factors that may put an individual at an increased risk of developing Bipolar Disorder including differences in brain functioning, genetics, stress, and family history. If an individual’s parent or sibling has the disorder, they are more likely to develop the disorder too. According to the National Institute of Mental Health, more than two-thirds of people with the disorder have at least one close relative who also has Bipolar Disorder.

However, having a relative with Bipolar Disorder does not guarantee someone else in the family will develop it as it is still relatively uncommon. If an individual has a family history of the illness and is also exposed to a significant amount of trauma or stress, that may add to the likelihood of developing the disorder. When risk factors compile, the likelihood increases.

The average age of onset for Bipolar Disorder is 25 but symptoms can occur in childhood and as late as 40s or 50s.

The treatment options recommended will depend on each individuals specific case and present situation. For those who are experiencing mild symptoms, an Intensive Outpatient Program (IOP), Individual Therapy, and Psychiatrist may be the right route to stabilize the patient with therapy and medications. With therapy, Psychotherapy and Cognitive Behavioral Therapy are usually the recommended options to consider. With more severe cases, often times inpatient and residential treatment may be required to stabilize an individual while having them in a safe and contained environment. Medications used to treat Bipolar Disorder include mood stabilizers, atypical antipsychotics, and antidepressants. It is important to talk with a doctor to find which option is right for you.

With Bipolar Disorder, a combination of treatment options is usually recommended. This may include medication and an inpatient or outpatient program. Consult with the Treatment Specialist today.

Individuals who receive treatment for Bipolar Disorder report high levels of satisfaction with their treatment and maintain a more positive attitude toward their illness. If you are someone you know is struggling with Bipolar Disorder, it is imperative to get help today. The sooner treatment occurs, the better the recovery will be.

Call 866-644-7911 to connect to a treatment center that will provide a free confidential assessment to review the individuals complete medical conditions, psych-social, and psychiatric conditions. You will receive individualized support and guidance to you or your loved one and find you the best possible treatment option for your unique situation and needs.