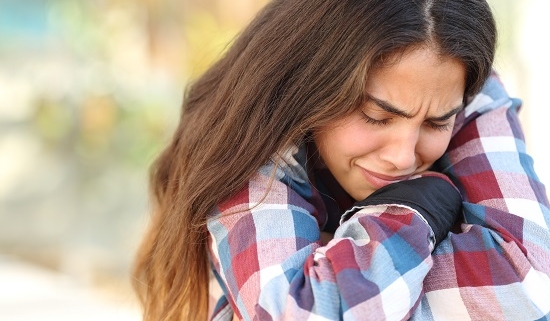 Post-Traumatic Stress Disorder (PTSD) is a condition that can affect individuals of all ages, genders, races, and socioeconomic situations. However, due to the intensely developmental nature of the teenage years, teenagers who are exposed to trauma may experience a unique set of negative consequences.

Fortunately, with the right resources, PTSD is something that can be effectively managed and eventually overcome. In this article, we will attempt to answer some of the most common questions that parents have about PTSD and trauma in teens. We will also reviews signs of PTSD in teenagers and discuss some of the treatment options that are currently available.

What is post-traumatic stress disorder (PTSD)

Post-Traumatic stress disorder is described by the Mayo Clinic as “a disorder in which a person has difficulty recovering after experiencing or witnessing a terrifying event.” PTSD can be manifested in individuals in a variety of different ways. While some individuals will consistently experience a more fearful or terrified mindset, others will only outwardly present their symptoms after they have been “triggered” by some sort of external stimuli.

Usually, symptoms of teen PTSD will begin within the first three months following a traumatic event, though some symptoms may not manifest themselves in a recognizable way until later. Individuals who are suffering from PTSD may begin avoiding new types of situations, experiencing nightmares, having PTSD “flashbacks”, and having difficulty experiencing external stimuli related to the traumatic event. For example, an individual who was bitten by a dog at a very young age may develop a life-long fear of dogs as a result.

Causes PTSD and Trauma in Teenagers

There are many different types of situations that can potentially create trauma and result in an individual having PTSD. Individuals who are abused or sexually assaulted at a young age are especially likely to develop lifelong symptoms. Experiencing trauma during childhood, the teenage years, and other important developmental phases is more likely to result in PTSD than experiencing trauma as an adult.

Teenagers may also experience PTSD as a result of bullying or other negative social interactions with their peers. If left unaddressed, this can lead to anti-social behaviors as a teenager develops over time. Other situations such as exposure to natural disasters, gun violence, car accidents, and other similar situations may also result in life-long trauma if left ignored for too long.

PTSD is strongly correlated with several different psychological conditions. Though these conditions are certainly different from one another, individuals who have experienced trauma are more likely to eventually display ongoing symptoms of depression, anxiety, and bipolar disorder.

Additionally, in order to cope or suppress their traumatic experiences, individuals with PTSD are uniquely prone to developing substance abuse disorders as well. The abuse of alcohol, stimulants, depressants, and hallucinogens can all come as a result of PTSD. Teenagers who begin experimenting with controlled substances in order to cope with PTSD may have a distinctively difficult level of recovering in the future.

When compared to some other mental health conditions, PTSD is fairly common. As stated, this condition is one that can negatively affect all kinds of people, regardless of their demographics or lifestyle choices. Because this condition is so distinctively common, psychiatrists have been developing a wide array of treatment modalities as a result.

Some individuals who suffer from PTSD may benefit from medications such as mood stabilizers and anti-depressants that will be used daily, or other medications that will only need to be used once the individual is experiencing a PTSD episode. However, there are many other approaches to treating PTSD that do not require the use of medication. Individual therapy sessions, group therapy sessions, and experiential treatment—which focuses on the use of positive experiences such as art, music, and nature—may be implemented. For the most severe instances of PTSD, a temporary stay at a residential treatment center for teens (RTC) is sometimes necessary.

Cognitive behavioral therapy (CBT) may also be used to help address PTSD. This particular treatment modality has been continually improved upon since it was originally developed in the mid-20th century. The purpose of cognitive behavioral therapy is to try to instill more positive thoughts in individuals who are suffering from mental health issues and to also improve their behaviors and feelings. Many individuals who have been treated with CBT claim that the treatment makes it much easier for them to deal with future sources of adversity (such as external stimuli).

How Can Parents Help Teens with PTSD

Being a parent of a teenager who is suffering from PTSD can often be quite difficult. If this condition is something that you have never experienced firsthand, you may find it challenging to empathize and understand what they are experiencing. However, even with this being said, there are still many things you can do to help.

The first thing you should do is to try to determine whatever external stimuli may “trigger” a PTSD episode in your teen. Understanding their personal triggers will help you know which situations to avoid and, for those situations that are simply unavoidable, this can also help your teen better cope with trauma. Additionally, you should remind your teen that what they are feeling isn’t their fault, that you love them, and that you’ll be there to support them no matter what they might be experiencing. Connecting your teenager with a licensed psychiatrist or other source of outside help may also often be quite beneficial.

Help is Available for Trauma in Teens with PTSD

If your teenager is currently suffering from post-traumatic stress disorder, it is important to recognize that you may be able to help them recover. Currently, there are a wide variety of effective treatment options that may be well within your reach. PTSD is a common condition, but many individuals who were originally suffering as teens go on to live full, satisfying lives. By creating a loving environment and by offering them the support that they need, you can help be part of the solution. Call to connect with a treatment center to learn more about treatment options at 866-644-7911.