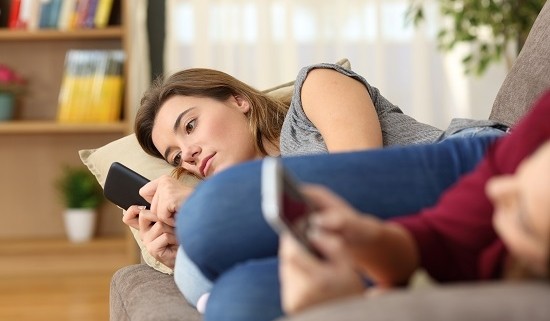 The average person spends nearly two hours (about 116 minutes) on social media every day. This amounts to a total of 5 years and 4 months spent over a lifetime. And this is only expected to increase.

Social media has become a huge part of our lives. We now spend more time on social media than we do drinking, eating, socializing, and grooming. And we rarely stop to ask: What is the effect of all this time spend staring at our devices?

According to a recent Huffington Post article, one effect is lower self-esteem. After recruiting a group of men and women, ranging from ages 28-73, who described themselves as active social media users, Clarissa Silva, a behavioral scientist and the article’s author had some interesting findings. Sixty percent of social media users reported that it has negatively affected their self-esteem and 50% reported social media had a negative effect on their relationships.

Another review of 121 studies led by Alyssa Saiphoo of Ryerson University in Toronto and her team found that social media use causes more harm than good. So just why does social media affect our self-esteem in the ways that it does?

In her article, Silva describes what she calls a “highlight reel”. This is the best moments, photos, and portrayals of people lives on social media. She notes, “it appears everyone you know are in great relationships, taking 5-star vacations and living your dream life.” This affect is so strong that Silva found that 80% of her study participants said it is easy to be deceived by others’ posts on social media.

This affect is also described by Seth Stephens-Davidowitz, the author of Everybody Lies: Big Data, New Data, and What the Internet Can Tell Us About Who We Really Are. Comparing Facebook posts to Google searches, Davidowitz found something interesting: most of what we post on Facebook is opposite to what we search on Google. We post, “Great date with my husband” on Facebook, but we search “Divorce lawyers” on Google. We post that we are loving our lives and in great health, but we are at home healing wounds and injuries.

We Are More Affected Than We Realize

In a fascinating study of Facebook habits, a team of researchers found that when people witnessed their friends eating 5 or more unhealthy meals on social media, they became 80% more likely to eat an unhealthy meal themselves.

Eighty percent of the U.S. population is trying to lose weight. It’s not hard to imagine how seeing posts of delicious foods affects our behavior. Pizza is most popular photo on Instagram. The more we see what we are trying to avoid, the harder it is to avoid it.

Consuming as much social media as we do can leave us feeling frustrated, lonely and depressed. We fail to realize that what we use to try to feel better affects us in ways we don’t realize.

We Feel Less (Not More) Connected

In her brilliant book, Alone Together: Why We Expect More From Technology and Less From Each Other, Sherry Turkle makes the case that while we used to reach to social media to share a feeling, now we reach to social media to have a feeling. We connect with people virtually, and these connections are influenced by the unrealistically polished portrayals of our lives. We end up feeling less understood, more alone, and more isolated.

Like Turkle, many researchers suggest people who use social networking sites spend less time having in-person relationships. They don’t have strong and supportive real-life relationships. They have less stable virtual ones. People with low self-esteem also may avoid awkward in person experiences. Instead, they have relationships on social media that they can control.

When we don’t face difficult situations and cherry pick our relationships we can’t grow. We just feel less connected and more alone.

Social media is here to stay and that is not going to change anytime soon. Our lives will become more “virtualized” in the years to come. Or in the fast-moving social media world, in the months to come. We can’t do much to stop this trend. But we can be aware that social media dramatically affects the way we feel. We make upward social comparisons, we are more affected than we realized, and we feel less, not more connected. And we end up feeling a lot worse about ourselves.