Perhaps the most striking example of the sheer shock of a drug overdose death was when Prince died suddenly on April 21, 2016, literally just days after delivering a memorable performance in Atlanta on April 14th.  Few knew that Prince even had a drug addiction, so the public was utterly surprised when the toxicology reports confirmed he died of a fentanyl overdose.

Drug overdoses and overdose deaths have exploded in the United States.  In 2014, the most recent data available from the National Vital Statistics System, overall drug overdose deaths are up 137% since 2000.  In 2014 alone, a total of 47,055 drug overdose deaths occurred, the most ever on record.  This statistic amounts to about 15% more than deaths attributed to breast cancer nationally and about the same number of deaths caused by colon and rectal cancer combined.

Opioids, including heroin, vicodin, oxycodone, and morphine, and synthetic opioids such as fentanyl represent the majority of the substances identified as the cause of the overdoses.  Opioid related overdose deaths accounted for 28,647 fatalities in 2014, a 200% increase since the year 2000.

Fentanyl is a synthetic opioid controlled Class A narcotic used to legitimately manage pain in patients.  Illegally produced synthetic fentanyl has fueled a recent spike in drug overdoses.  Fentanyl is concocted with ingredients shipped mostly from China to labs located primarily in Mexico, from where they are distributed to the U.S.  China continues to tweak the chemicals (the newest version is “furanyl fentanyl”) to stay a step ahead of the DEA. Synthetic fentanyl is being laced with heroin, often unbeknownst to the user, and also used in fake versions of oxycodone pills.  Users are not aware of the high potency of the ingredients, leading to overdose or overdose death.

Although the scourge of drug overdoses is being witnessed across the U.S., some states have much higher rates than others.  According to the Substance Abuse and Mental Health Services Administration (SAMHSA), there were 14.7 drug deaths per 100,000 people in the year 2014 overall.  The states with the highest overdose death rates were: 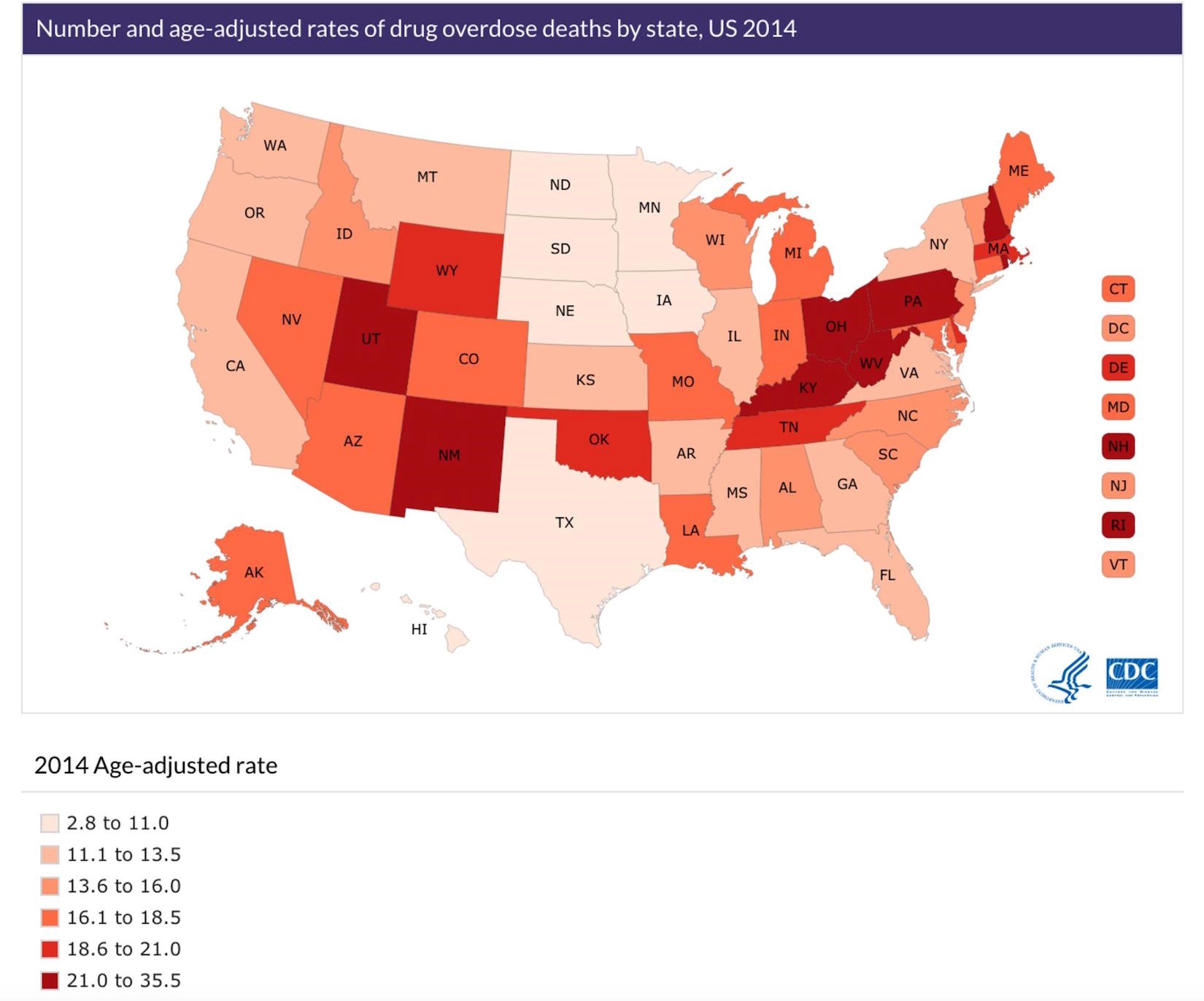 Where it used to be assumed that drug poisoning deaths and overdoses were limited to urban communities of low socioeconomic status, today the reality is clear.  Drug overdoses occur just as often in suburban and affluent communities as they do in poor populations.

The prevalence of physicians over-prescribing opioid medications for pain or injuries has led to widespread dependence on the medications.  Once tolerance to the drug increases, the patient will seek to ramp up dosage to continue to appease the brain’s neural pathways that have been reset due to chemical dependency.

In other instances, teens and young adults seeking a recreational high may hijack a parent’s prescription medications and use the opioids in social settings.  They may eventually acquire a chemical dependency as they seek the high they first experienced.  Over time find they cannot afford to continue to purchase the pills, thus turning to the cheap alternative, heroin.  Heroin use has been skyrocketing for a decade now, increasing among men and women across all income levels, with heroin overdose deaths totaling 8,200 in 2013.

The trajectory is clear, the exploding rates of overdose deaths continue to climb nationwide.  If you or a loved one are battling drug addiction and are reading this now, it isn’t too late to turn your life around.  There is help available to overcome addiction, The Treatment Specialist can connect you with a treatment center that can give you the direction you need right now.  Contact a compassionate treatment specialist and allow us to help you win this battle.  We will match your needs to the best treatment option available, as well as help determine your insurance eligibility.  Call us today at (866) 644-7911 for high quality addiction treatment program options.