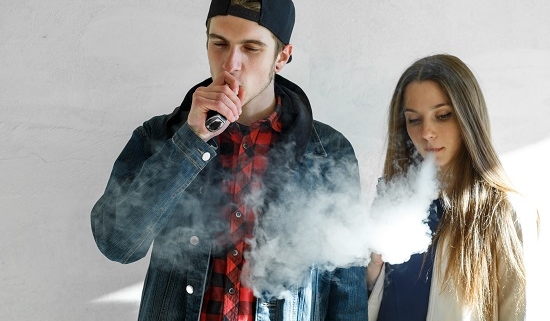 The rise of e-cigarettes and vaporizing technology has unleashed a perfect storm for the next generation of addicts. First introduced as the cleaner, safer alternative to traditional tobacco products, vaping products have been marketed by nicotine providers effectively for the last couple of decades. In the last couple of years, there has been a steady increase in adoption by high school students and middle school students. The growing adoption of the technology has been attributed to social pressure, flavor profiles of candy, mint, fruit, and chocolate, and the belief that this technology presents a safer alternative to what was formerly the nicotine delivery system. Companies are obviously concerned with their bottom line, so opening new markets besides smokers trying to quit traditional cigarettes is paramount to their longevity and success. This is why the youth market is so integral to their survival, which presents moral, ethical, and health questions for society.

Much of the marketing of these devices is targeted at the emerging youth market, which is another reason for the growing trend in teens vaping. Without many federal restrictions on e-cigarette marketing, companies have been able to promote their products through traditional channels such as television and radio. This is despite a ban on traditional cigarette advertising in the 1970s in an effort to reduce cigarette advertising to children. Social media and the internet have also played a major role in the commercialization and normalization of teens vaping. Creating buzz on social media is one of the tactics of major e-cigarette brands, promoting their products on Twitter, Instagram, and Youtube. With this youth-oriented marketing strategy, it is no wonder these companies are sponsoring music festivals and events geared towards the impressionable youth. Ironically, these tactics are actually banned for cigarettes and smokeless tobacco companies. The Tobacco Control Act was signed into law on June 22, 2009, giving the FDA authority to regulate the manufacture, distribution, and marketing of tobacco products, but e-cigarettes were not initially bound by these restrictions. That is why their marketing has been so successful, as regulators had to catch up with supplemental briefs to that TCA to hamper e-cigarette companies’ marketing activities.

Though vaping seems like a new technology, ancient people utilized vaping techniques thousands of years ago. Shisha tobacco was first vaporized using hookahs in India during the medieval period. The waterpipe was invented by Abu’l-Fath Gilani, a Persian physician of Akbar in the Indian city of Fatehpur Sikri. These single or multi-stemmed instruments popularized flavored cannabis, tobacco, and sometimes opium, whose vapors were passed through a water basin. The water acts as filter in these devices, but ultimately fails to filter out toxic chemicals. This water filtering was eventually adopted by the marijuana user base in western cultures of the 20th Century in the form of a “bong.”

In modern times, the first record of an electronic vaporizing device was a patent filed by Joseph Robinson in 1927 that was granted in 1930. It was never brought to market or even known to have been prototyped, and it took until the 1960s for one Herbert A. Gilbert to develop a device that resembled the modern e-cigarette. Though he created prototypes, he failed to commercialize the product. In 1979, Phil Ray, a computer pioneer working with Norman Jacobson, created the first e-cigarette that was commercialized, though it was not electronic, but relied on the evaporation of the nicotine. The device never panned out, but the inventor did coin the verb “vape”, which has been added to the lexicon. The 90s saw numerous patents for nicotine inhaler devices that either relied on evaporation or physical propulsion, but some shared similarities with modern e-cigarettes. The technology went dark for a few years after the FDA denied a U.S. tobacco company from bringing an e-cigarette to market in 1998. Then, out of nowhere in 2003, Hon Lik, a 52 year old pharmacist, smoker and inventor from Beijing China, created the first commercially successful device developed by the company he worked for, Golden Dragon Holdings, known as the Ruyan, which translates to “like smoke.” The company wasn’t challenged until 2008 when The World Health Organization proclaimed electronic cigarettes as illegitimate smoking cessation aids and to remove any material that suggested WHO considered them safe and effective. Ruyan funded a study that same year, done by Health New Zealand, who did a detailed quantitative analysis which concluded the carcinogens and toxicants present in the devices were below harmful levels. According to this study, the product was deemed safer than smoking, which has been perpetuated since that time. More and more countries started banning and regulating e-cigarettes, but the battle over this addictive device has only increased. Companies’ profits have surged over the years as they have grown and spread their products throughout the global market. The level of saturation is apparent as teens vaping has gained recent attention due to a number of deaths and complications from the use of these devices.

These devices come in many forms, whether they be e-cigs, vape pens, pod mods, electronic nicotine delivery devices (ENDS), or e-hookahs. The basic concept is the same- a liquid is heated to create a vapor that is inhaled from the device. The liquids themselves are known by many names: oil, pods, cartridges, e-liquids, or e-juice. Many of these vaping liquids contain propylene glycol or glycerin as a base, while being a delivery medium for nicotine, marijuana, and other flavoring agents from mint to watermelon. Usually a battery is responsible for powering a heating element that aerosolizes the liquid into a vapor, so a user can consume that vapor into their lungs. That is how effectively the drugs are delivered into the pulmonary system.

The pressure to light up traditional cigarettes has now shifted into the pressure to spark up an e-cigarette with teens because vapor and e-cigarette companies have been marketed their vaping products and wares specifically to the youth of this country for years, which means a growing populous of active users. A large number of teens see vaping as a social activity that gives them status and a cool factor. Though these teens may have started out as fad adopters, this new vice has the potential to lead them down a long and dangerous road of addiction and dependency.

Peer pressure has always existed within society, so the teens of today often feel the influence of “the cool kids” that either exists in their own social networks or even digital social networks. Now, with online networks filled with thousands of “friends”, the teens have even more pressure than generations of the past. As influencers are paid to pedal products, the likelihood of teenagers parroting and role modeling unknowingly from a paid advertisement in sheep’s clothing becomes even more likely. As highly suggestible targets, children and young people are marketed and advertised to aggressively by companies selling these addictive products. This has been the case since marketing was created, because it guarantees revenue for years to come. This is why flavors such as blue raspberry, cotton candy, and fruity pebbles are created, because children love them.

Another aspect of teens vaping is the idea that vaping is not as harmful as smoking cigarettes. Teens breathe out the vapor, which is thinner than and not as potent as cigarettes, so they think it is less harmful. Of course, this is not the case, as there are a series of side effects just with the use of nicotine. A cigarette contains 25 percent of the addictive component nicotine, while e-cigarettes contain as little as 5 percent. That difference may give the user a false sense of security, but that addiction to nicotine can grow to include real cigarettes. That is not to mention the other harmful chemicals included in these vapor delivery systems. Some of these devices are as small as a thumbdrive and actually charge via a USB port, so many times teachers and parents can overlook them. Out of sight also means out of mind, so this only adds to the hidden danger of teens vaping.

E-cigarettes heat nicotine, flavorings, and other chemicals to create water vapors for the user to inhale. Regular cigarettes contain as much as 7,000 chemicals, many that are toxic to humans. Though an e-cigarette contains many less chemicals, they still contain toxic and harmful agents. Federal and state officials have reported hundreds of cases of pulmonary disease and several deaths related to the devices because of these hidden dangers. Patient’s symptoms include:

The FDA has been investigating samples that include THC, nicotine, Vitamine E acetate, and a range of other possible chemicals. Even if they identify a culprit, it is unclear if that is the entire story. That is why it is important to understand the risks associated with vaping.

Is vaping addiction something that can be treated? Like every addiction, there are treatments available that range from behavioral therapy to medications to rehab centers or treatment centers. Medical doctors may prescribe non-nicotine medications like Zyban, Chantix, or Pamelor. Doctors may prescribe more than one medication for better results. Treatment programs with trained professionals are better equipped to handle the seriousness of vaping addiction. Doctors, medical staff, and therapists work with addicts to treat the various elements of vaping addiction. These include chemical, psychological, and various strategies to lift someone out of the darkness of dependency. Please contact a  Treatment Specialist today at (866) 644-7911 for more information if you or a loved one is suffering from vaping addiction.