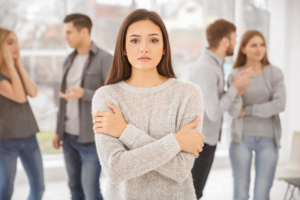 Social anxiety disorder, also termed social phobia, is characterized by an irrational fear of being publicly humiliated or judged by others. Social anxiety surpasses the common feelings of shyness that can often occur in a social setting. Instead, social anxiety features intense feelings of anxiety that are so strong the individual may experience the same symptoms as a panic attack.

According to data provided by the Anxiety and Depression Association of America, about 15 million adults in the U.S. suffer from social anxiety disorder. Individuals with socials anxiety disorder are at a higher risk of developing co-occurring depressive disorder and alcohol use disorder.

Social anxiety has the effect of limiting one’s potential in achieving personal goals.  Due to the intense fear associated with public appearances, social anxiety causes the individual to avoid situations that are performance or competition-related, or may limit exposure to social settings that would benefit them professionally, such as networking, attending conferences, or even the annual office holiday party.

Because the usual way people that most people manage their social anxiety is through avoidance or isolating behaviors, the long-term effects of social anxiety can be significant. Career prospects will be passed by due to fear of networking or interviewing. New relationships may be avoided due to fear of rejection or being judged.

When someone struggles with social anxiety disorder, they may experience intense anxiety throughout their days. The extreme self-consciousness they feel causes a lack of confidence in themselves and their abilities. If the individual is expected to be present at a work conference or an important social event, the anxiety symptoms that result may be debilitating.

Symptoms of social anxiety disorder include:

There are some risk factors that are associated with developing social anxiety disorder. These include:

of U.S. adults are estimated to have had social anxiety disorder in the past year

of U.S. adults are estimated to experience social anxiety disorder at some time in their lives

of adolescents are estimated to have had social anxiety disorder, and an estimated 1.3% had severe impairment 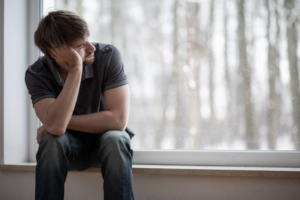 Treatment for social anxiety disorder is similar to treatment for panic disorder or trauma disorders. A comprehensive plan would include a combination of psychotherapy, adjunctive therapies, holistic therapies, and medication:

Call 866-644-7911 to connect with a treatment center that will provide a free confidential assessment that will review the individuals complete background including medical conditions, psych-social, and psychiatric conditions. You will receive individualized support and guidance for you or your loved one. We will find you the best possible anxiety rehab and treatment option for your anxiety conditions and your unique situation and needs.