Heroin Addiction is a powerful and baffling condition because it has become a leading killer in the United States.  There has been an aggressive increase in heroin overdose deaths from 2001 to 2014, going from 2k per year to over 11k deaths in the United States.  This means that if you or someone you love and care about is suffering from heroin addiction, it is time right now to get help and avoid from being another statistic. 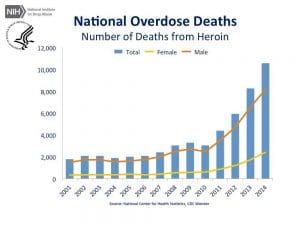 Heroin Addiction can be successfully treated and many people recover and go on to live healthy and successful lives.  It may seem like there is no hope right now, but the truth is, the discomfort is only temporary and will come to an end during the recovery process.  The initial phase of recovery is tough but worth every moment!

Heroin detox symptoms can be managed and the severity greatly reduced under the care of a licensed heroin detox center.  It is common among heroin users to want to use again during the detox process to avoid the withdrawals, but this can be very dangerous and even fatal.  When a person’s body is detoxed from the high levels of the heroin and a user goes back to use the high amounts of when they last used, they are very likely to overdose because their body simply could not handle the same levels.  This is a leading reason for overdoses among heroin users and needs to be discussed and known.

Consequences of heroin addiction are typically very significant and wreak havoc in work, relationships, physical, and emotional well-being.  Heroin addiction also often leads to lying and stealing from family members and strangers to acquire more money to buy the drug.  These acts quickly turn into legal troubles and many heroin users are faced with criminal charges on top of their mounting troubles.  If you are faced with legal issues because of your heroin use, often going to detox and treatment will only help lessen the overall severity of the legal consequences.

Heroin addiction is a serious condition that needs immediate medical attention.  A Treatment Specialist is standing by to help guide you or your loved one to get help in a high quality and reputable detox facility. Get help now and call toll free at (866) 644-7911.